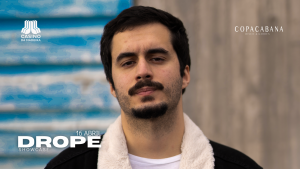 We received for its premiere, the first edition of Copacabana Live with a Showcase of the promise of Madeiran Hip Hop DROPE. There is not much to say about this independent artist from Funchal. However, there is much to hear. João Fernandes “DroPe”, released an EP in the summer of 2019 called “CATARSE”, and over the last few years he has released a series of record works, namely “Movimento”, “Digital”, “Mero Acaso” and the last one “Horas Extra” that has sparked interest in the work of this young artist. The quality led him to be invited to be present at this year’s edition of the Summer Opening that will take place in Parque de Santa Catarina on July 16th, in the same way that he will be the first guest, in showcase format, of Copacabana Live.