PZ performs in Live Act format at the Garden 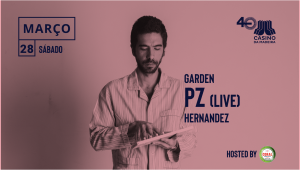 PZ is Paulo Pimenta, and started making music in his room with a computer, a sampler, and one or two synthesizers when he was 16. As he learned to operate machines and to play various instruments in a self-taught way, he developed his own sound that took on another dimension with the way he exposed his ideas through his lyrics and his voice. PZ puts everything on clean plates and does it his way not only through the music he produces from wire to wick, but also by making his own video clips tampered with by a sui-generis variation of the “do-it-yourself” aesthetic as we can witness in videos like “Olá”, “In Meu Lugar”, “Nada Mais”, “Mundo”, “Passeio”, “O Que Vale és tu Tu”, and “Cara de Chewbacca” a song that resulted from a collaboration with dB.
A premiere not to be missed on March 27 at Garden do Casino, a night that will also count on Hernandez’s DJ set.